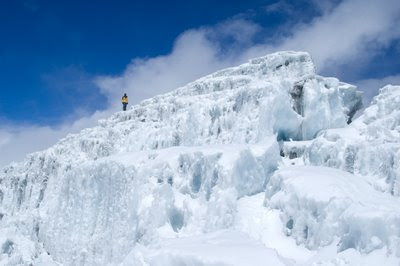 Only four months since my last trip up, and time for another... unplanned and unbudgeted! The September trip was largely successful, especially in terms of Northern Icefield work. Over the course of 5 days the weather station received a complete service, including change-out of several key instruments, lots of mass balance stakes were visited, and there was time for several GPS surveys. Although a medical emergency precluded visiting the southern glaciers, most objectives were completed and we were hoping that the 'short rains' would begin soon.

No such luck. The 2008 short rains utterly failed, both on the mountain and regionally. In conjunction with conflict earlier in the year, this lack of rainfall brought great hardship to eastern Kenya. By mid-January, Kibo's summit had not seen subsantial snowfall since early June, so very low surface albedo was causing considerable absorption of solar radiation. The impact? Mass loss from horizontal ice surfaces - lots of it! Satellite telemetry from the station revealed a grim reality, that measurements were in jepeordy without a trip to reset (lower) the tower down into the ice (cf. New York Times, Feb. 2001).

Fortunately, collaborators from Innsbruck had been planning a January 2009 trip for several months, and were kind enough to let me piggy-back onto their logistics. This trip was based from the Marangu Hotel's peaceful setting, and their staff supported our effort on the mountain. We spent only 4 nights going up, a bit less than I've found optimal, and then 3 at the summit.

No snow was visible on the mountain from Marangu, or from the east side as we drove around to Rongai - conditions more typical of August. Thereafter though, every day of our trip featured rain and/or snow and/or thunder, except, paradoxically, our final descent through the rainforest.

At the summit, ablation since September was readily apparent. A thin mantle of new snow (5-10 cm, accumulating daily) partially obscurred dirtier ice surfaces than I'd seen in years (see image above). Some horizontal ice surfaces are now quite old (decades to centuries), with high dust concentrations causing low albedo. In just 4 months, ablation had reduced ice thickness by a meter in some places! On one glacier, 7 of 8 mass balance stakes had ablated out, and drilling new holes on 3 different glaciers occupied a chunk of my time. However, work focused on lowering the tower; most of the job was done in just over 2 strenuous hours, thanks to help from Geoffry, Good Luck, Leoned, David and Samuel.

Descending from the summit glaciers in a snowstorm, we pondered whether the short rains were late in arriving, or the long rains were beginning early.