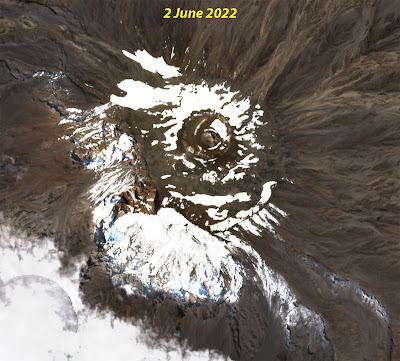 Throughout eastern Africa the dry season is getting underway, a period of 4-5 months with minimal precipitation. June typically begins with complete snowcover on Kilimanjaro, resulting from the March-May rainy season, which in some years supplements January snowfall events as well as snow deposited during the November-December short rains. With reduced cloud cover and lower temperatures on the mountain during the dry-season months, snow gradually sublimates and melts. This annual cycle of snowcover was roughly defined by the late 19th century:


Although Kilimanjaro lies near the equator the extent of its ice and snow varies with the season. The southern summer (December to May) is also the rainy season in the Kilimanjaro region, and it is then that the accumulations of ice and snow are greatest. In the southern winter (June to November) there is a comparative dearth of moisture, the snowfall is proportionately slight, and the process of melting goes on rapidly; hence, by the end of the season, the accumulations of ice and snow are at their smallest.
Hans Meyer, Across East African Glaciers (1891)


Snow currently blankets only about half of the summit caldera, and only the southern flanks - as illustrated on the satellite image above, from last week (2 June). Within the caldera, this pattern of accumulation has remained quite consistent through the 2022 long rains. More noteworthy is that accumulation is clearly less than normal. Compare this year's snowcover with that of 2020 and 2018 in these images:

In a larger spatial context, snowcover on Kilimanjaro following the long rains is illustrative of the "current extreme, widespread, and persistent multi-season drought (1)" affecting East Africa, particularly in Kenya, Ethiopia, and Somalia. The figure below depicts only the most-recent wet season precipitation, as the satellite images also reflect. A joint statement by the World Meteorological Organization, UN Food and Agriculture Organization, and others states that "The 2022 March-May rainy season appears likely to be the driest on record, devastating livelihoods and driving sharp increases in food, water, and nutrition insecurity" (1). In addition, East African air temperatures have been higher than normal, and these are forecast to continue through the forthcoming dry season.

The current drought to the north of Kilimanjaro is both a direct and indirect consequence of climate change, and climate variability. Factors include a multiyear La Niña event (2), a longterm decrease in Long rains precipitation, more intense and severe extreme events, as well as changing large-scale patterns of convection and subsidence, driven by Sea Surface Temperature (SST) anomalies in the Indian Ocean.

Decreased snowcover on Kilimanjaro during the 2022 dry season will hasten ablation of the glaciers. Comparing the current satellite image with those of snowier years dramatically illustrates the role of snowcover in determining the reflectivity of solar radiation. Without snow, the dark volcanic surface absorbs radiation, heats up, and radiates longwave radiation to the air and adjacent ice. Kilimanjaro's summit is 5000 m above the drought-stricken plains below (primarily north of the mountain), providing information on the climate system from the mid-troposphere. These shrinking glaciers serve as a constant reminder of the importance of precipitation to human and natural systems.
Posted by admin at 8:08 AM No comments:

A glimpse of the receding south-side glaciers 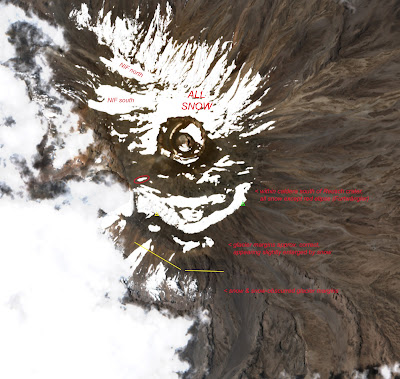 Delineating Kibo's southern slope glacier margins on satellite imagery has been difficult in recent years. This is because snow cover has persisted on both the glaciers and adjacent surfaces (see one dramatic example here). While the coverage is relatively uniform following snowfall events, ablation subsequently creates a patchy mosaic, reflecting variable snow depth (e.g., due wind redistribution) as well as topographic shading, slope, and aspect.

The issue of glacier margin delineation is nicely illustrated by the image above (Sentinel-2, acquired 19 March 2022). The southwest quadrant of the image is obscured by clouds. North of the Reusch Crater, most of the white pixels depict patchy snow cover, excepting the two remaining portions of the Northern Ice Field (NIF; labeled). The NIF southern and eastern margins are partially visible due to ablation adjacent to the near-vertical ice wall, a typical situation observed days-weeks after snowfall events.

South of the crater, Furtwängler Glacier is only ice mass entirely within the caldera, shown within the red ellipse on the image above - and likely appearing slightly larger than reality, due adjacent snow. The white arc on the image south of the crater is entirely snow, extending from west of Uhuru Peak (yellow triangle) to east of Gilman's Point (green triangle). The southern margin of this arc coincides with the steep caldera rim; snow on the north side is shaded from sun during the boreal winter, yet almost entirely ablated on the south side.

The white patches high on the southern slope, above the yellow lines, are primarily glaciers:  Kersten Glacier fragments directly south of Uhuru, the tiny Decken's Glacier finger to the east, and remnants of Rebmann Glacier just left of the label. Lower on the slope, below the yellow lines, we see a mixture of both snow-covered rock, and glacier fragments with snow cover.

Although the southern glacier margins cannot be precisely located on this image, it reveals that recession has continued despite relatively snowy conditions in recent years. For example, compare the image above with this view from July 2009.

With luck, we'll be back on Kibo in September, for a first-hand look at changes since our last fieldwork in February 2020 (including a Red Bull film).
Posted by admin at 2:56 PM 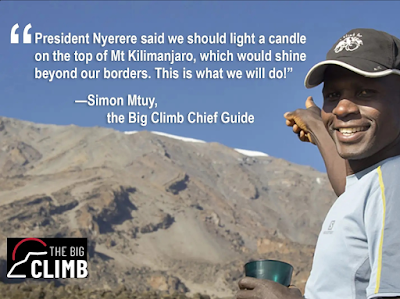 Good friend Simon Mtuy just returned from the mountain, following an effort to raise awareness of the need to fight the COVID-19 pandemic together. The Big Climb is raising funds to better track and understand the virus, equip health care workers, and to purchase vaccines for equitable distribution on the understanding that ‘no one is safe until everyone is safe’.

Simon is the perfect person to guide this talented, diverse group of 34 climbers up the mountain - including both young leaders, and accomplished all-star leaders. Who else but Simon could assemble such a group and compliment it with amazing ultrarunners Francesca Canepa, Maude Mathys, and Mira Rai* - wow! Also supporting the effort were the good folks at Marangu Hotel, with whom we have worked for nearly 20 years.

Check the impressive list of partners, and read more about everyone involved here! 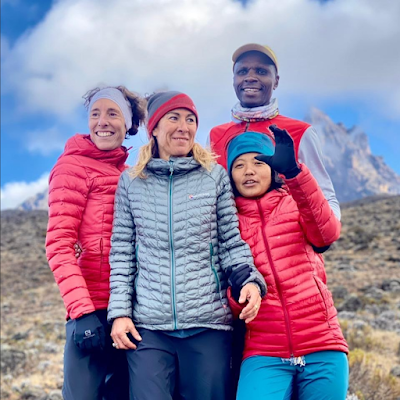 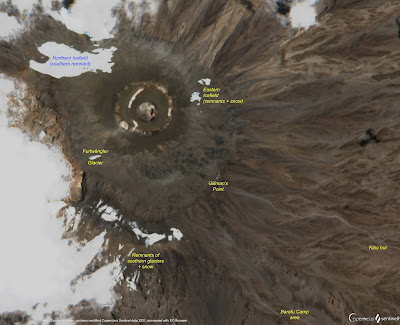 Our most-recent fieldwork at Kilimanjaro summit was in February 2020, as the global pandemic began. Since then the mountain has been unusually quiet, with many guides and porters unemployed. They are as anxious as we are to get back up the mountain! Although satellite imagery allows us to assess some changes on the mountain, it is no substitute for on-site measurements and observations. Our reliable instrumentation on the Northern Icefield was functioning 18 months ago, yet the current status is unknown.

The image above was acquired by ESA's Sentinel-2 two days ago, revealing perhaps the least snowcover in several years. Such a view is especially valuable, as distinguishing between snow and ice on imagery is difficult. Clouds of course also complicate interpretation, and in this case case there are scattered clouds visible over the Northern Icefield's northern remnant, within the Breach on the west side, and over low-elevation portions of the southern glacier remnants. On visible portions of the south side, residual snow is estimated to comprise roughly half of the bright patches (i.e., non-glacier).

Noteworthy changes apparent in this image include on-going shrinkage of the Furtwängler Glacier (see above). The extent of south-side glaciers has clearly decreased, even acknowledging residual snowcover. At the Northern Icefield, the east end appears to have experienced the greatest change, due generally-thinner ice and a less-linear margin. In addition, several locations suggest that areas of anomalous geothermal heat are involved with ice loss, an ablation mechanism we have documented elsewhere at the summit. Further information on these new features will hopefully be forthcoming soon from Tanzanian collaborators. 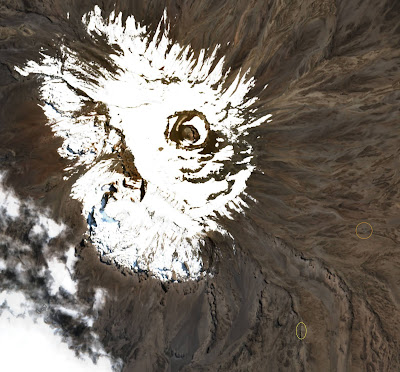 Satellite imagery of Kilimanjaro from the European Space Agency's Sentinel-2 is available every five days. Yesterday's nearly cloud-free image (28 April, above) and that from 23 April nicely bracket the time period when Tropical Cyclone JOBO approached the coast of Tanzania. On the 23rd, thick clouds obscured the mountain - except for the crater and a pie-shaped slice to the west, which are nicely visible.

Comparing these two images suggests essentially no snow accumulation on the mountain during the 5-day interval. The pattern of snowcover yesterday resembles that on the mountain since mid-January. Depth appears to have been thin at times when the snow-covered area was greater (i.e., following snowfall events). In general however, there currently appears to be less-than-average snowcover on the mountain, with another month remaining in the long-rains wet season (March-May).

It will be interesting to learn where the highest precipitation totals were recorded during JOBO.

For reference on the image above, Kibo Hut on the Marangu Route is visible within the orange circle (above), while the yellow ellipse highlights Barafu Camp. Trails leading toward the crater rim are faintly visible in both cases.
Posted by admin at 2:35 PM No comments:

Snowcover within the Kibo caldera may have reached an annual minima last week. The two-image Sentinel-2 timelapse above shows the same area, five days apart.

The mostly cloud-free image on 4 November depicts the largest extent of snowfree area for calendar year 2020. Nonetheless, note the extensive snowcovered area east of the Northern Icefield and north of Reusch Crater; this was evidently an area of higher accumulation during the previous wet seasons. South of Reusch Crater, white areas within the caldera are all patches of snow - with the exception of one remaining fragment of Furtwängler Glacier, the east-west oriented body just south of the extensive snowfree area. On the caldera's south side, snowcover blankets the south-southwest facing slope and delineates the rim, closely paralleling the trail from Stella Point to Uhuru Peak. Encompassed within this area are the upper fragments of Kersten and Deckens Glaciers, with less-continuous snow around the Rebmann Glacier. Below the upper south-side glaciers is a steep, 100-150 m band without snow, then patchy snow and the snowcovered lower fragments of the Kersten and Deckens Glaciers.

Snow blankets the entire upper portion of the mountain on 9 November, as visible in the second image (despite a thin cloud veil). This snowfall event is "right on schedule" in terms of the precipitation climatology for high elevations of Kilimanjaro. This would be a fascinating time to be up there, for a survey of snow depth and spatial variability...

I hear from friends in Mweka that wildfires on the mountain are now out, thanks both to some rain, and hard work by personnel. They burned quite close to the Mweka (descent) trail, just above the upper forest line, a zone which has been severely impacted by fires and climate change in recent decades (see Andreas Hemp reference within this link). A helicopter pilot from Kenya was able to provide valuable assistance to firefighters for several days.

Today's satellite image - and that of 20 October - shows considerable cloud cover on the mountain, as expected at this time of year. A "hole" in the clouds does reveal the caldera's west side, and much of the Breach, to now be snowfree.

The next clear view of the mountain will be posted here. Will any seasonal snow persist to the next period of accumulation? Stay tuned!