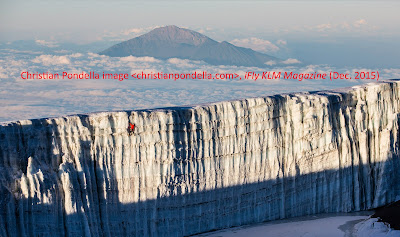 This month's issue of KLM's in-flight magazine iFly has some nice photographs of climber Will Gadd, shot on Kibo's summit glaciers by Christian Pondella. One of these is above, showing the upper margin of Kersten Glacier as viewed from Uhuru Peak. Many summit climbers have enjoyed this view, with Mt. Meru ~70 km to the west through very clear air.

Despite continuing shrinkage of Kilimanjaro's glaciers, the steep margins remain impressive. For scale, the climber in this image indicates that the cliff is ~18 m or 60 ft. high. The meltwater lake at the base has been present there for many years. Has anyone ever seen it not frozen?

Most interesting here is how early-morning light highlights the stratigraphy of Kersten Glacier. As other perspectives also show, there are "bands" or "layers" of ice which are darker than those above or below. Thinking back through time, these likely formed when the surface was exposed for a period of time - probably years or decades - either due to no net snow accumulation (neutral mass balance) and/or to ablation (negative mass balance). Instead, dust accumulated and was subsequently buried during an interval of snow accumulation. Now exposed at the vertical wall, the high concentration of dust absorbs more solar radiation than the surrounding, relatively-clean ice, and absorbed energy leads to melting and sublimation -- highlighting the stratigraphy. Such features provide evidence of a complex ice history on Kilimanjaro.