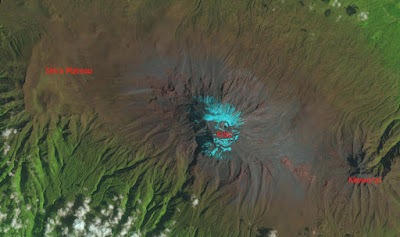 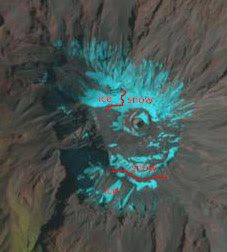 The two images above are both from the same scene, acquired by NASA's ALI sensor (Advanced Land Imager) on 2 January 2016. The upper image shows the 3 Kilimanjaro massif components; the distance between the Shira Plateau edge and the summit of Mawenzi is ~30 km, demonstrating how large the mountain is. In general, snowcover persists for more than a few days only on Kibo, as seen here in the bluish color.

The second image illustrates the difficulty in distinguishing between snow-covered ice and transient snowcover on the volcanic surface. This difficulty has created confusion even among remote sensing experts. One example is here; although the text no longer purports to show receding ice, NASA refuses to kill this deceptive pair of images.

Shown here is the result of the 2015 Short Rains, which this year were of 6 weeks duration, extending from the second week of November to mid-December. A net height change (i.e., snow accumulation) of 32 cm was recorded at the AWS for the season.

Subsequently, January and February each saw one wet interval lasting 10 and 7 days respectively, and resulting in 8 cm then 12 cm of net height change. Not much snow relative to week-long wet intervals on other mountains, yet these were cloudy and humid periods. A beautiful view of the summit crater (below) was taken just prior to the February snow, over two weeks after the January event ended. Thanks to Alex Schwap of Salzburg for sharing this! Only tiny portions of glaciers are visible in Alex's photo (on horizon), demonstrating that minor snowfall events are preserved only in areas of topographic shading and on the glaciers.

By March 1st the AWS glacier surface was ~18 cm higher than when the Short Rains began in early November. This height change is less than the sum of events due to a combination of densification of the snow and ablation by sublimation. Melting of the newer snow also likely occurred, yet some of the meltwater probably percolated through the snow and refroze upon coming in contact with the less-permeable ice.

This new snow will keep the glacier surface albedo relatively high, serving to protect it against mass loss until the Long Rains begin.