Fieldwork! This year we were on the mountain slightly earlier than in recent years - during late July into early August, the core of the dry season. Our primary objective was recovering AWS data and servicing instrumentation, as well as measuring the network of ablation stakes. In addition, photographer Ian Van Coller (Montana State Univ.) was along to document the summit glaciers and shoot portraits of the Tanzanians joining us; check his wonderful photos on Instagram and his website. Fantastic logistical support was again provided by the SENE team (Summit Expeditions and Nomadic Experience)!

Below are some images from the fieldwork, with brief captions. Feel free to contact us with any questions.

1.  Kibo (left) and Mawenzi (lower peak to right) viewed from the highway west of Moshi, looking up 5,000 m through relatively clear air. The maize crop near Moshi was ready for harvest, much later than those in "home garden" villages at higher elevations on the mountain. 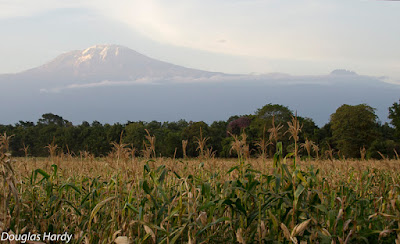 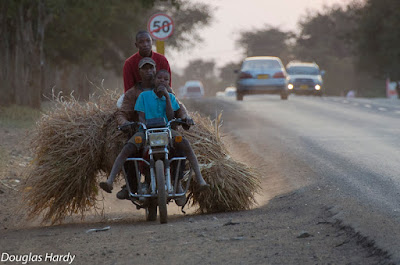 3.  At Mbahe Farm; young banana tree and us not-so-young mzungos. 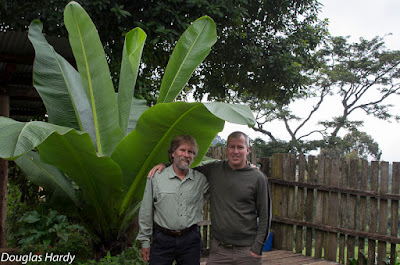 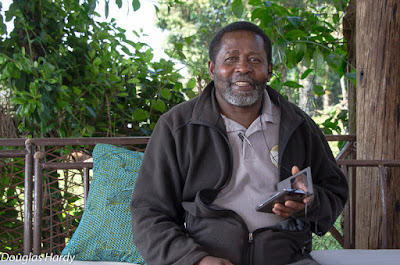 5.  Friendly Mbahe children, a highlight of every visit. 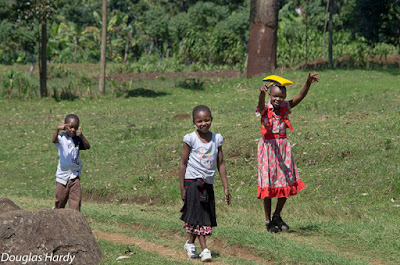 6.  On day 2 of our ascent up the Umbwe Route: Ian photographing one of our first Kibo views. 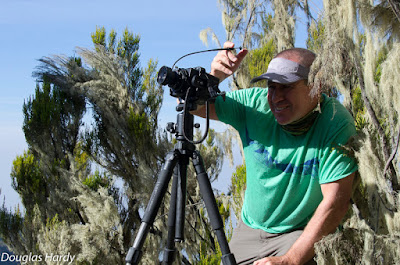 7.  Barranco Camp (4,000 m) is certainly worthy of the crowds, but fortunately for us it was one of the only camps we shared with other groups. And in case you are wondering, there are at least 137 tents visible in this image! 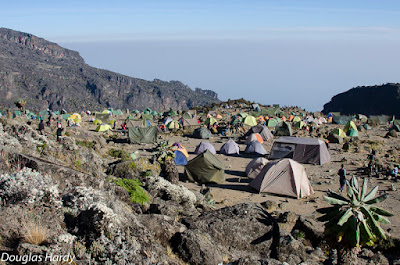 8.  Two south-side glaciers on Kibo:  Kersten on the left and Deckens on the right. Both have thinned and retreated dramatically in the past couple years. Note that seasonal snow is also visible - in addition to the ice - above ~5,500 m. 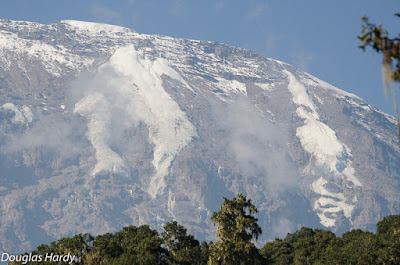 9.  Glaciers slightly to the north of those above, along with the Western Breach on the left-hand side. Most interesting in this late-afternoon view is a small waterfall of meltwater, barely visible at the cliff base, just left of center. 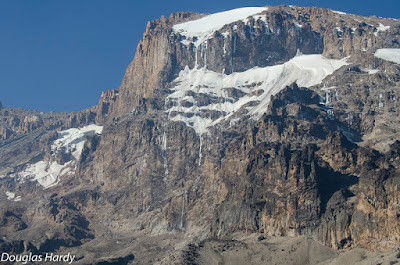 10.  Northwest of the Breach, Uhlig Glacier was depicted on the earliest maps of Kilimanjaro's glaciers. Contrary to what one might read on the web, this glacier endured until sometime within the last year. Although a minor ice body, the Uhlig hadn't changed much in recent years due to topographic shading and persistent, local cloud cover. The two images below are from slightly offset perspectives, yet the glacier is clearly now gone... 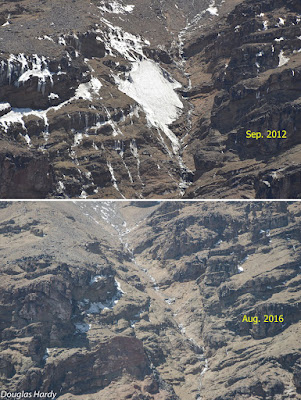 11.  Our ascent this year came up the mountain's north side from Pofu Camp. The final campsite on this dry, rather difficult route was a scenic perch at 5,200 m looking north to Amboseli National Park, with Mawenzi just barely visible in the other direction (over the ridge; see below). 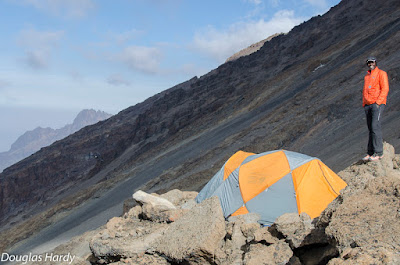 12.  Simon Mtuy ascending toward the camp shown above. 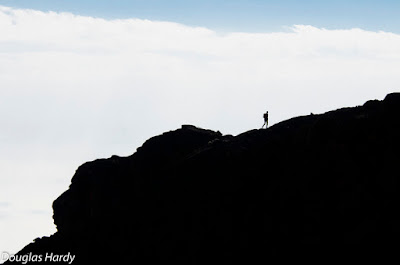 13.  Summit glaciers! Reaching the crater rim on this trip was especially rewarding after our scramble up. Beautiful lighting then brought Ian's progress to a screeching halt. 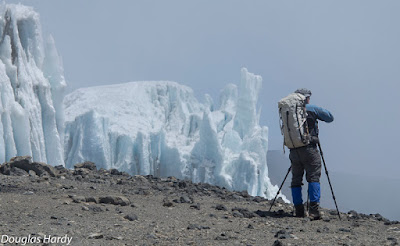 14.  Our camp beside the Northern Ice Field. Dramatic retreat of the glacier continues all around the margin. Ironically, the mass balance on flat horizontal surfaces has been near-neutral for the past 5 years, and in places the ice is still 40+ m thick! 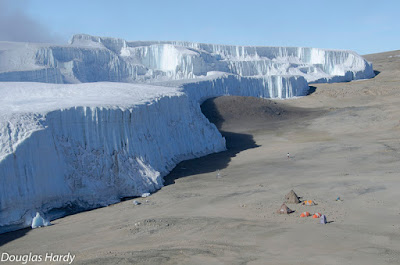 15.  Detail of the Northern Ice Field margin. This particular section provides an atypically-clear view of ice stratigraphy in the upper portion of this glacier. Except for a very thin veneer, this is all dense glacier ice, not firn. 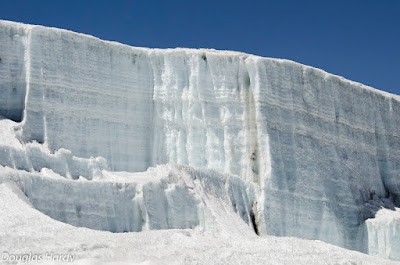 16.  Another perspective on the Northern Ice Field margin, with Simon for scale. 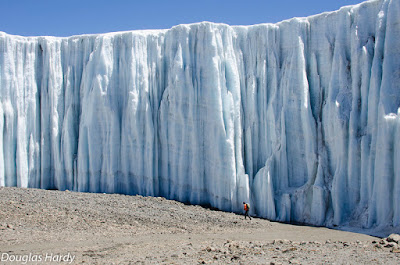 17.  Upper margin of the Deckens Glacier, along with seasonal snowcover and a frozen meltwater pond. Dust accumulation - some of which is due climbers heading to Uhuru Peak - results in very low albedo on the vertical surface, leading to considerable absorption of solar radiation each morning. 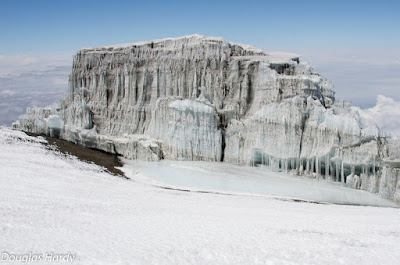 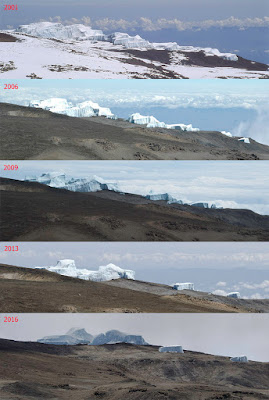 19.  A fragment of Furtängler Glacier, vanishing without a trace almost before our eyes. A larger remnant is shown in this GigaPan image, which will soon be the only way to explore this glacier. 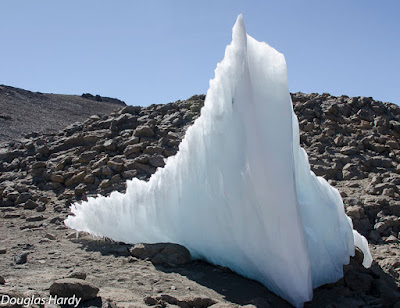 20.  Mawenzi from near Uhuru Peak, with convergence of trails at Stella Point. 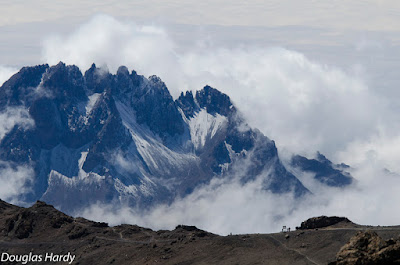