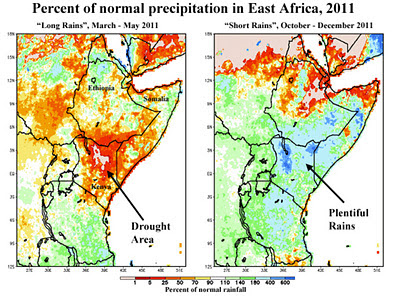 The Weather Underground blog has a helpful discussion of the drought which so terribly impacted East Africa this year, and author Jeff Masters points out that it was 2011's deadliest weather disaster. He annotates several figures from NOAA's Climate Prediction Center (above), showing that the drought was concentrated to the north of Kilimanjaro. Likewise, the most anomalous rainfall through the currently-underway short rains season has also been further north. On the mountain, the relative snowfall amounts are consistent with regional patterns depicted in the figures.

Masters also provides some thoughts on East Africa's future vulnerability. Considerable uncertainty exists between measured precipitation trends, and that predicted by models due to changes in Walker circulation. Kilimanjaro snowfall and glacier mass balance measurements support evidence from station data for steady drying of the climate in recent decades.
Posted by admin at 3:12 PM