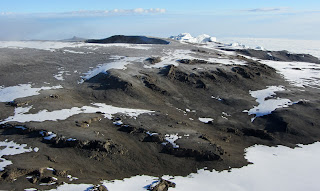 The 2011 short rains on Kilimanjaro summit continued until the very end of December, with most snowfall occurring during the second half of November. For the season, net snow accumulation on the Northern Ice Field amounted to ~30 cm.

The image above shows an easterly view across the crater on 28 December, just prior to the year’s final snowfall event; snowcover in the crater is often “patchier” than that on the glaciers (credit:  Rohun Gholkar). On the graph, the timing of this photograph is indicated by the light blue star. After departing the summit, Rohun’s team encountered sleet and rain, which was likely associated with 3 days and ~10 cm of snowfall on the glacier (see graph; dashed line indicates midnight on New Year’s Eve).

Very little snowfall occurred during January 2012, as shown in the lower figure, resulting in a net surface height lowering of 19 cm. Two 48-hour intervals of rapid lowering are highlighted by red lines on the graph. Based on weather station measurements received by satellite telemetry, these seem to have been intervals of enhanced sublimation. We cannot be certain, but this interpretation is based on the following, which pertains to both intervals:  air temperature was 2.0 – 2.5° C lower than normal for January, the sky remained mostly clear, wind speed was ~50% higher than normal (directly from the east), and relative humidity averaged a very low 20-25% instead of ~60% as on a typical January day. Together, these are perfect conditions for sublimation.

Any first-hand observations and/or photos from the summit area during these dry intervals (Jan. 1 & 2, Jan. 22 & 23) would be greatly appreciated!
Posted by admin at 1:39 PM