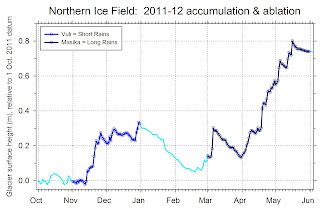 After more than 12 years of meteorological measurements on Kibo's Northern Ice Field, the most-recent period October through May has - for the first time - followed the expected pattern:  'short rains' during November and December, a brief dry interval into February, substantial and prolonged 'long rains' in March-April-May, and then commencement of an extended dry season by June. The figure above details this pattern through increases in glacier surface height (snowfall) as well as decreases (ablation).

Variability in the seasonal timing and magnitude of precipitation at Kilimanjaro's summit is the norm, despite an annual cycle of humidity which follows the 'expected' pattern rather closely. Both small- and large-scale aspects of atmospheric circulation modulate the humidity pattern and influence snowfall, and the timing and amount of snowfall is hugely important to glacier mass balance there. Documenting the inter-annual variability of precipitation on Kilimanjaro and measuring the impact on glaciers is why we keep the AWS going!
Posted by admin at 10:17 AM