Five days at the summit

We are just back from fieldwork on the summit glaciers, concentrating on the Northern Ice Field. After 4 nights on top for some of us, we accomplished most of our objectives. Thermal imaging was unfortunately postponed yet again, due insufficient time for export control paperwork. Nonetheless, this was a fun group and everyone adapted well to the altitude. Fieldwork did present a few surprises which will be detailed later.

Below are a couple images from the trip. The first illustrates a small portion of the mountain's largest glacier, showing automated weather stations on the upper surface and our camp in the foreground. For late in September, considerable snowcover was present on the glacier and patchy elsewhere within the crater.

The lower image demonstrates why high-elevation observations are so valuable in helping to understand tropical, mid-tropospheric climate. The stratification visible in the image - sharp, spatially uniform, and persistent - is often present in northern Tanzania at a varying altitude. For reference, the distant peak (Mt. Meru) reaches over 4,500m -- and on this day was still not within the free atmosphere! Virtually all climate stations in the region are yet another 2,000 to 3,000m lower in elevation; they simply cannot accurately represent conditions high on the mountain. Two AWS currently operate on the Northern Ice Field, as shown. During this trip a 4-component net radiometer was added to the left-hand station, which will improve the accuracy of our radiation measurements. Also shown (within red circles) are 3 of the NIF ablation stakes, installed to help track gains and losses of mass at the glacier surface. 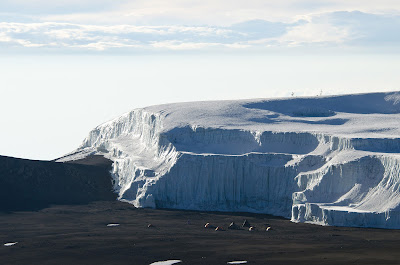 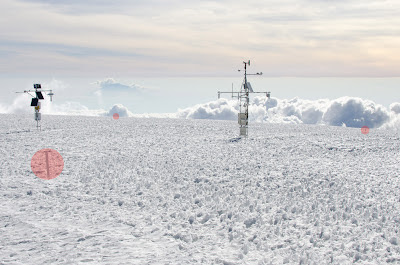