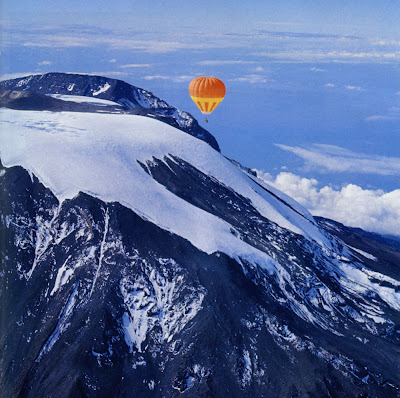 Anyone with an interest in "animals, adventure and discovery in the wild places of Africa" will enjoy reading Alan Root's memoir Ivory, Apes and Peacocks. The book was published last year in London by Chatto & Windus, an imprint of Random House Group Limited (UK), and although not yet available in America it is easily available from English booksellers.

One of many fascinating stories in the book details the flight Alan made with his wife Joan over Kilimanjaro. Root does not specify a date for the flight, which based on other information was likely 10 March 1974. Launching from the eastern flank, they flew as high as 7,500 meters. He writes that "we gazed down from our gossamer craft as the dome of Kibo, the highest point in Africa, slid slowly by -- almost a mile below us."

Then, as today, Root notes that "any snow falling on it soon melts." The image above with the balloon shows the incipient hole developing in the Northern Ice Field, which Hastenrath & Geischar observed on a 1989 Landsat scene and discuss in their 1997 Journal of Glaciology paper. Enlargement of the hole eventually split the ice cap into two parts last year (2012).

Once past Kibo they started dropping towards the Shira plateau and encountered a dead spot where "the balloon came slowly to a halt." Evidently they were in a zone of converging horizontal airflow, coming around both sides of the mountain, and before afternoon convection was well developed.

Root landed the balloon in Moshi. As might easily happen today upon such a landing, they "were quickly surrounded by a crowd of curious and laughing Africans". Less likely to happen today, fortunately, Alan next heard automatic weapons being cocked. Along with his wife and ground crew, they were arrested, accused of spying, and hauled off to the Moshi police station for 2 days of interrogation.

This is the only portion of the book pertaining to Kilimanjaro, yet every page offers fascinating observations and accounts of his African experience. Numerous reviews have been written on the book; here is one from The Economist.
Posted by admin at 3:58 PM