The 2017 'short rains' season brought very little snow accumulation to the summit this year. Although snowfall is often variable during the short rains (typically November and December), this year was especially dry and resulted in a net lowering of glacier surfaces.

Early January brought the first noteworthy snow accumulation to the glaciers since the dry season began in June 2017. The graph above, illustrating January snowfall, is based on snow measurements obtained from the Northern Icefield AWS by satellite telemetry. Such measurements must always be viewed cautiously, as wind redistribution of snow and other factors can complicate data interpretation - yet as average measurements from 2 sensors, their reliability is improved.

Snowfall is critically important to Kilimanjaro glaciers, primarily by controlling the amount of solar radiation reflected from the surface. When a bright snowcover exists, the reflectivity (albedo) is high; aging snow becomes gradually less reflective, and thinning snow allows radiation to penetrate through to the underlying glacier ice.

On the graph above, numbered squares correspond to a selection of natural-color images from the ESA (European Space Agency) Sentinel-2 satellite, shown below. These depict snow accumulation steadily increasing during early January, culminating in the events of 10 and 11 January. With little precipitation through the balance of the month and into early February, the mountain's snowcover then thinned and became patchier.

Here are a few notes on the Sentinel-2 images, which qualitatively demonstrate that Kilimanjaro glaciers are sensitive to the magnitude, frequency, and spatial extent of precipitation events!

Image #1, 30 December 2017:  Clouds to the west of Kibo, filling the Western Breach and obscuring the southern slope glaciers. Within the caldera and south of the crater rim, uniformly-white areas are glaciers (likely with some snowcover). No snowcover is present within the caldera, with only a light dusting on the highest northern slopes, and some accumulation on the north-facing section of the caldera rim (e.g., below Uhuru Peak). 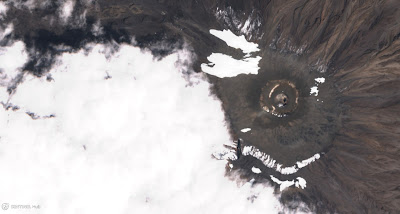 Image #2, 9 January 2018:  Extensive clouds, yet uniform snowcover is visible within the caldera. Note the lack of snow on a small portion of Reusch Crater (dark area), where geothermal heat flux is probably responsible for melting any accumulation. The graph above shows that this image represents snowcover prior to the two largest snowfall events of January, on the 10th and 11th. 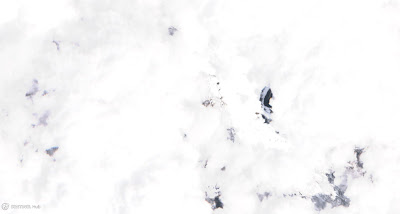 Image #3, 14 January:  Little or thin cloud cover is present over the Kibo caldera, in contrast to the clouds obscuring the mountain's western and southern flanks. Snowcover is extensive, as suggested by the graph above. 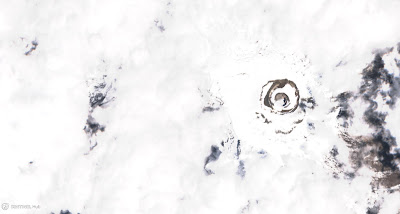 Image #4, 24 January:  Scattered clouds surround the mountain at elevations below ~5,000 m. Snowcover from early January has thinned within the caldera and on the glacier (see graph), and generally become patchier. Albedo of the glacier surfaces remains high, reflecting most of the incoming solar radiation. The Reusch Crater is now mostly snow-free, and limited snow remains within the Western Breach. Climbers going to the summit on this date were likely walking on snow most of the distance above Stella Point. 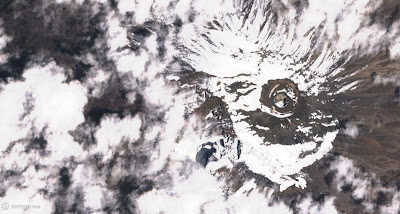 Image #5, 8 February:  A typical February day on Kibo, with scattered clouds concentrated to the south and west. Snowcover patches within the caldera have shrunk further. Note the almost complete lack of snow on eastern and south-facing slopes; even at only 3° south latitude, solar radiation receipt is greater on south-facing than north-facing slopes in early February! 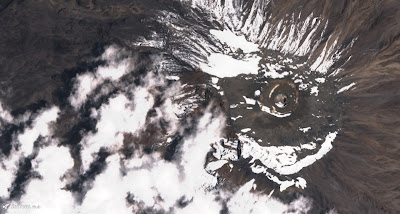 Image #6, 18 February (not shown on graph):  Without measurable snowfall since image #5 was acquired (see above), the extent of snowcover continues to decrease, lingering primarily on steeper north-facing slopes. During this time the Northern Icefield surface decreased in height by another 10 cm, and with ablation of January snow the surface is likely bare glacier ice once again. On the southern slope of this image, distinguishing between snow and ice is difficult for those unfamiliar with the glaciers, yet these ice bodies were all contiguous only ~10 years ago. As shown below - and explained in the 21 November post - this is no longer the case, as the glaciers continue shrinking. 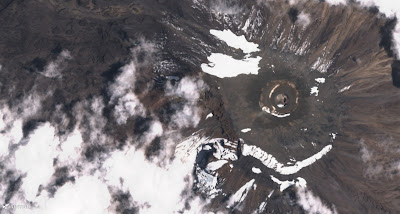