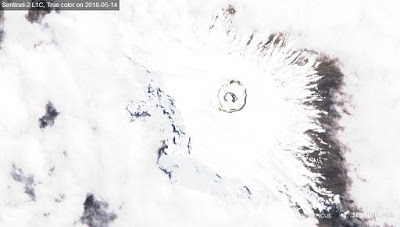 Ablation has dominated over accumulation on Kibo recently, yet the mountain remains snowy. On a Sentinel-2 image from yesterday (above), note the rising snowline and thinner snowcover on ridges and east-facing slopes - relative to images posted previously. With minimal clouds over the summit caldera, the Northern Icefield margin can now be distinguished, just to the northeast of the Reusch Crater (outer circular feature).

Below are some images contributed by Adam Quenneville, from his visit to the summit on ~26 April. The panorama looks south over the upper Kersten Glacier from near Uhuru Peak. Note how the windblown and frozen snow surface allowed climbers to walk without breaking through. The middle image shows the Northern Icefield (upper left) and the Furtwängler Glacier margin - including the tiny remaining eastern fragment. Adam's team is shown at Crater Camp in the lowest image, with the Furtwängler and Northern Icefield in the near and far background, respectively. 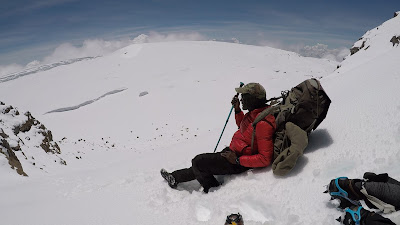 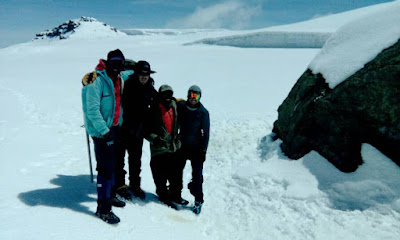