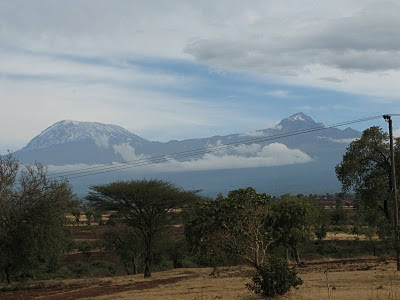 Here is an out-the-car-window shot of Kilimanjaro from 21 March (courtesy Michael Winkler, Innsbruck Univ.), with a mantle of fresh snow. Michael departed from a snow-free crater on the 19th. By the 21st, my telemetry data from the Northern Ice Field does not indicate accumulation (cf. this south-side view), suggesting that snowfall was primarily on the south side. This asymetry is typical of snowfall during the Long Rains (March-May). However, appreciable snowfall on the Northern Ice Field did begin in the evening of the 22nd and continued at least into the 23rd; additional smaller events continued sporatically up to today. On the 27th, Timba from Ahsante Tours & Safaris wrote that in Moshi it was "pouring big time" and that the "mountain has been on an all time white look since last week." He says that "the SE prevailing winds have begun" and the long rainy season is in "full swing."
Posted by admin at 12:06 PM