During the Wings of Kilimanjaro (WoK) expedition in early February, a helicopter flew to the summit with supplies for the group. The pilot was Ben Simpson of Tropic Air, a company based at the foot of Mt. Kenya and experienced in carrying out rescues there. Tropic Air uses the French-made Eurocopter AS 350 B3, from which WoK videographer Anika Craney got some great footage. A 12.5-minute clip of the flight is posted on the WoK FaceBook page, available here.

The following captures are from Anika's video, posted here to provide an update on recession of the glaciers; several of the perspectives she obtained are quite unique.

Below is the less-commonly seen half of the Northern Ice Field, with the eastern edge at left. The crater is behind the upper ice as seen here. Despite extensive snowcover (for early February) the split between the two halves is clearly visible; this did not exist and/or was not known prior to ~1989. 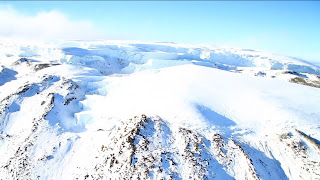 At the bottom edge of the image below is Stella Point. Trails to both the summit and crater camp are visible. The eastern end of the Rebmann Glacier is in the foreground. The apparent "hole" was recently observed on satellite imagery, and may have developed due to anomalous geothermal heat flux. Alternatively, it may have begun as a supraglacial pond which enhanced shortwave radiation receipt. 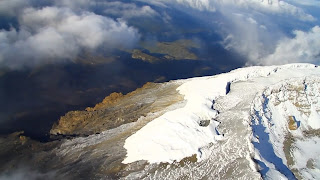 Fragments of the Southern Ice Field are seen in the next image. Beginning on the right-hand side, the Rebmann Glacier used to extend downslope but is primarily confined to the crater rim these days. Although partially obscured by cloud, this view provides a context for the image above. The narrow Decken Glacier becomes thinner each year, and may soon be cut off from the ice above. The largest ice body remaining is the Kersten Glacier, which is also seen in the fourth image. Within the past couple years the Kersten has become detached both from ice above and from the Decken Glacier to the right. Lastly, the Heim Glacier is the small sun-lit body of ice beyond the lower Kersten. As recently as 10 years ago the upper portion of this glacier began not far below the crater rim. 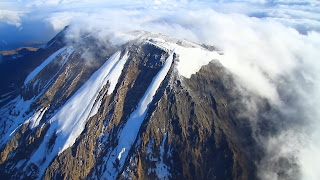 Below is detail of the view above, showing how the Kersten Glacier has fragmented from the Decken, and into an upper and lower portion. Uhuru Peak is the high point behind the upper section and obscured by cloud in this view. 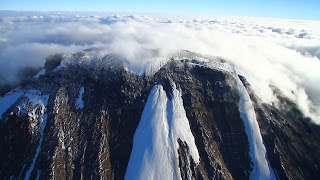 Many thanks to WoK and Anika for posting this video!
Posted by admin at 2:25 PM