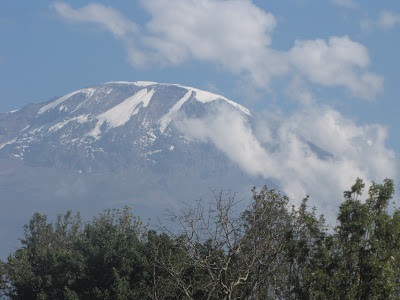 [UPDATE 12 Feb. 18:00 GMT] A final update to the weather graphic has been posted below (or here). Wind speeds and direction have returned to more typical, seasonal values. It was ironically the interval 3-6 February with anomalously high wind speeds, while the expedition was at the summit and prepared to fly off. Was early February a good time of year for the flight? Certainly; the longterm mean values shown in plots A and B both demonstrate that - on average - conditions at the summit at this time are very reasonable for paragliding. But, as we have learned in our decade of measurements, the interannual variability of climate on Kilimanjaro is large -- and summit weather can never be taken for granted.

[UPDATE 7 Feb. 04:00 GMT] Telemetry data from the summit as of midnight Wednesday local time have been added to the graphic below. Late yesterday the wind speed dropped, and Thursday is beginning with winds steadily from the East at a more reasonable speed of 8 m/s. However, humidity was high through the day Wednesday and approaching saturation at midnight. Note how little snow ablation occured (plot C). Looking forward, the forecasting models show a strong gradient in 500 hPa-level humidity parallel to the Tanzania-Kenya border, so exactly how the pattern becomes established may determine if tomorrow (Thursday) is flyable. Lets hope for the best.

Previously:  at 9 AM Tuesday morning, the image above shows how Kibo appeared from Moshi (courtesy my friend Simon at Summit Expeditions:  website and FaceBook). Such great clarity is the result of strong easterly wind. Very strong. Too strong for paragliding.

Check the graphic below to see a context for wind speeds since Sunday; plotted values have been updated to 8 AM local time this morning. In quantitative terms, the 4-hourly wind speed for the period 20:00 - 24:00 last night was 18.4 m/s = 36 knots = 41 mi/hr = 66 km/hr. This is more than 2 standard deviations greater than the longterm mean for this time and date, and as discussed in the 1 Feb. entry below, wind speeds over shorter intervals (e.g., 1-min average) have almost certainly been much greater. Furthermore, this 4-hourly speed equals the highest 4-hourly February value we have recorded on the glacier, which occurred 8 February 2004 (8 AM to 12 PM).

The forecast does indicate lessening wind speed, although it may be another day or two. To clarify yesterday's post concerning wind speed decreasing through the morning, this is the generalized diurnal pattern on Kilimanjaro, not a forecast. Nonetheless, the NOAA Climate Prediction Center forecast for the Kibo grid cell shows decreasing wind speeds at 500 hPa in the hours ahead. Lets hope so, for those seeking to fly down.

Lastly, this nice image from Moshi clearly shows the glacier changes mentioned in the previous post. Ice extent today is quite different from that of 10 years ago shown on the Wings of Kilimanjaro FlyTrace map.
Posted by admin at 11:00 PM