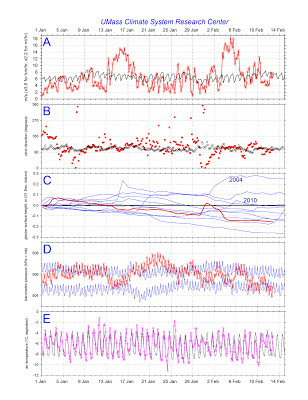 [click graphic to open in a new window, or here for a PDF]

The Wings of Kilimanjaro expedition reached Barranco Camp today (1 February), right on schedule. Their FaceBook page mentions seeing fresh snow at the summit as they traveled from Moir Camp to Barranco via Lava Tower (see graph above and discussion below). The group of 68 pilots, 16 passengers, 11 crew and 600 porters are climbing up for a paragliding event from the summit on approximately 5 February. The Tanzanian Government has sanctioned this event, which hopes to raise over USD 1,000,000 for three different East African charities.

Pilots and guides may be interested in a historical context for weather on the mountain, provided here for wind speed & direction, snowfall, pressure, and air temperature over the period 1 January to 15 February. Also shown on each graph are 2013 measurements obtained by satellite telemetry; these will be updated through the interval as time permits. Thanks to Mike Rawlins in the UMass Climate System Research Center for extra effort with data processing.

An article detailing our involvement with Wings of Kilimanjaro has just been published in the Boston Globe, and available here.

Plot A depicts 4-hourly averages of mean horizontal wind speed, in meters per second (m/s). This long averaging period is required by telemetry limitations, and actual wind speeds will ALWAYS be higher; averages shown differ from much-shorter, standard wind speed averaging times (e.g., 1-minute). In black is the average 4-hourly wind speed for the period Feb. 2000 to Sep. 2012. Values are slightly smoothed by a 3-day running average for each time (SD of the mean is ~3 m/s, not shown). Note the diurnal cycle in wind speed, typically with morning maxima. Plotted in red are 4-hourly wind speeds for 2013.

To convert wind speed to km/hr, multiply values shown by 3.6; a multiplier of 2.2 will convert values to mi/hr (MPH).

Plot B illustrates wind direction, with black circles showing mean 4-hourly resultant values (2000-2012), and 2013 4-hourly vectors as red squares. Note how consistent the mean airflow is at this time of year, from just south of East, with greater-than-normal variability lately.

Accumulation (snowfall) and ablation are depicted in Plot C, referenced to 31 December for each year shown. Blue lines show 2002 - 2012 (w/o 2009) and the red line shows 2013. Considerable interannual variability is illustrated. Note that the summit has received very little new snow between 3 and 29 January. We have a report* that on the 29th (Tuesday) it "rained a lot between Shira and Barranco camp" and that "it snowed big time at Crater Camp, Arrow Glacier Camp, and in the Western Breach." According to the AWS, summit snow accumulated for about 24 hours beginning at midday on the 30th. About 11 cm accumulated quickly, a substantial event for the arid summit. [*Thanks to Timba at Ahsante Tours for this.]

Plot D shows barometric pressure, with +/- 1 standard deviation of the mean 4-hourly averages shown in blue, and 2013 4-hourly values shown in red. Note that the semidiurnal pressure oscillation is apparent even in 4-hourly data! Also, pressure between 16:00 on 19 January through the 23rd was higher than measured for any of these 4-hourly intervals since June 2001. The significance of this is not entirely clear, but could reflect an interval of anomalously warm troposphere at altitudes below this level (i.e., increasing geopotential height).

Finally, plot E is air temperature as measured within our aspirated radiation shield, with 2013 values in pink. Note the early-morning minima on the 24th. The relative warmth shown on 29, 30, and 31 January is likely due to cloud cover, as humidity began increasing in the afternoon of the 29th (not shown).

NB:  All discussion and accompanying figures on this website are for scientific purposes only, to aid in interpreting the climate on Kilimanjaro’s Northern Ice Field. All data are preliminary and not in real-time; measurements may not be representative of conditions at the summit, in the surrounding atmosphere, or elsewhere on the mountain. The author and any institutions with which the author is affiliated assume no responsibility for any application of these interpretations or these data, including but not limited to paragliding and hang-gliding. Be safe!
Posted by admin at 10:40 AM