The first week of March brought a net snow accumulation of nearly 50 cm to the Northern Icefield, which by any measure is a snowy interval on Kilimanjaro. This precipitation follows 25-30 cm of continuous ablation during February, as illustrated in the previous post. A context for the event follows.

Figure 1 (below) shows Sentinel-2 satellite images of the exact same scene, on the last day of February and on 5 March. As detailed in another post, snowcover was primarily confined to steep north-facing slopes by the end of February. Although considerable cloud cover is present around the mountain on the 28 Feb. image, the summit caldera is mostly cloud free. Note the red squares, which are co-located on the 5 March image for orientation. High clouds partially obscure the March image, yet pervasive snowcover is visible. A sharp snowline at ~4,400 m is visible on the left-hand side of the image. 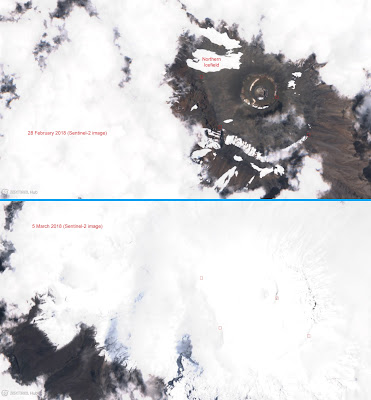 Figure 2 provides two snowy views of the mountain from the Moshi area (SENE credit). Despite low resolution of the 3 March image (upper), substantial snowfall obviously occurred since the satellite image acquired 3 days earlier. Snowcover appears to be somewhat more uniform than it was on 8 March (lower) - consistent with the timing and magnitude of snowfall recorded at the summit weather station.

At the Northern Icefield, satellite telemetry (Argos) shows ~12 cm of accumulation on 2 March, ~15 cm on the 3rd, and ~5 cm on each of the next 4 days. The precision of these daily totals will be improved when higher temporal resolution data are recovered from the automated weather station. Due to the diurnal cycle of climate on the mountain, some ablation likely also occurred on most of these days and is probably responsible for the patchier snowcover on the 8 March image. 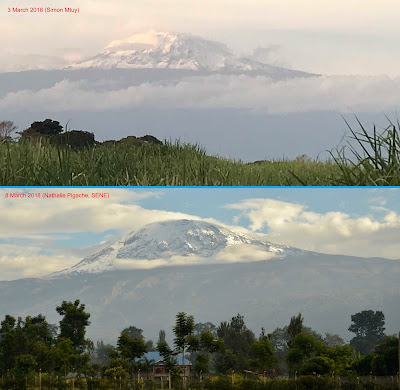 A fascinating element of this snowfall period is provided by a depiction of regional-scale circulation (Fig. 3; Cameron Beccario credit). Here, airflow on the morning of 4 March is illustrated at the 500 hPa pressure level, equivalent to Kilimanjaro summit elevation. Airflow at this level appears to have been influenced by Tropical Cyclone Dumazile beginning on the 2nd as the storm intensified, continuing through about 7 March. The relationship between Kilimanjaro snowfall and cyclones in the southwest Indian Ocean is being investigated with collaborators Thomas Mölg and Emily Collier (Friedrich-Alexander University), along with Timba Nimrod.

On this figure, Kilimanjaro's location is shown by the green circle. Note the westerly wind, which prevailed through the snowy interval. Wind measurements at the summit (via telemetry) verify this airflow, which is atypical at the summit (only ~5% of hourly means are from 270° ±30°). Riming of the instruments appears to have occurred during the event, causing data loss particularly on the 3rd, 4th, and 6th. Nonetheless, such verification of airflow by in situ measurements is not a trivial finding - for very few continuous meteorological measurements exist from nearly 6000 m with which to compare output from numerical models. 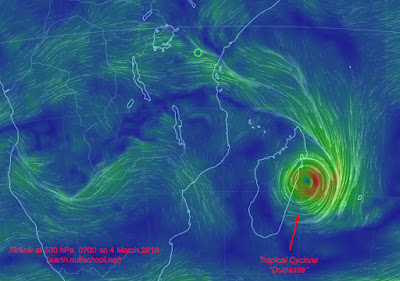 Finally, figure 4 depicts circulation and humidity on 3 March. Here the highest humidity is shown in cyan color, suggesting a Congo basin origin for this precipitation event. 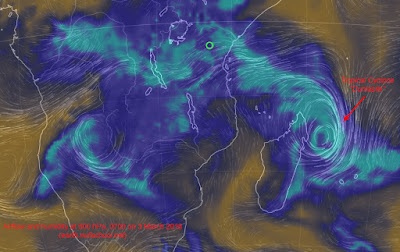