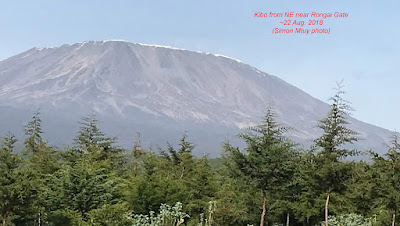 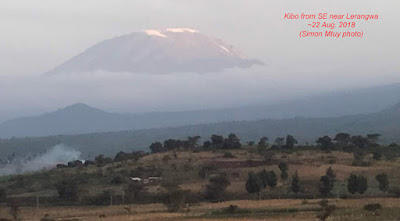 Two views of Kibo from the plains below reveal that snowcover has largely ablated from the mountain's slopes. From the northeast (upper image) dry slopes appear capped by a fringe of snow on the crater rim, while the Northern Icefield is visible in the second image.

Both images above were taken during the 2018 Kilimanjaro Stage Run, a wonderful way to experience the mountain and the diverse cultures residing on the flanks. Adventurous runners of all abilities should look into this fun event!

Below is another view of snow on the mountain, acquired one week later. Nearly complete snowcover remains within the summit crater, although it appears that the trail to Uhuru Peak is now free of snow. Lower on the mountain, trails and camps are visible in this European Space Agency image.

Despite the extent of snow within the crater, telemetry of measurements from the Northern Icefield indicate that the glacier surface lowered by 15-20 cm, likely due to sublimation, melting, and compression of long-rain snow. This snow benefits glacier mass balance by adding mass and reducing energy exchange (e.g., reflection of solar radiation) - briefly reducing the glacier recession rate. 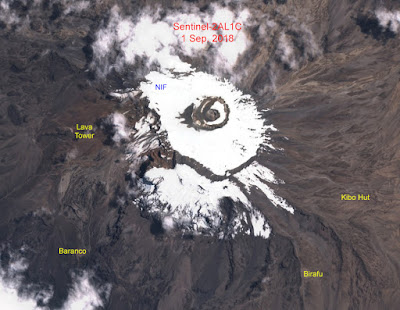