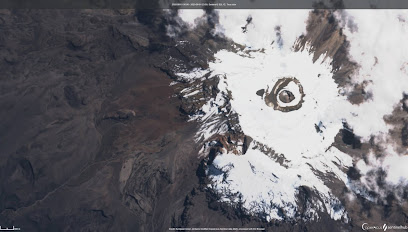 Very few climbers have been visiting Kibo's caldera lately due to the pandemic, but satellite imagery shows extensive snowcover - even as we reach the approximate mid-point of the 2020 dry season.

The Sentinel-2 image above was acquired on 1 August. Snowcover has thinned somewhat over the past couple months, revealing interesting textures of the relatively-flat ash within the caldera; note for example those between the Reusch Crater and Uhuru Peak. Might these lobate features be periglacial?

With bright snowcover on the glaciers, ablation has likely been minimal. This situation is similar to that of the 2018 dry season, when a 2 August image also shows nearly-complete snowcover within the caldera. In contrast, there was no snow at the summit last year at this time.

Another curious ablation feature is visible within the caldera, on the Reusch Crater's western slopes. The dark area of bare ground was not present during the snowy dry season two years ago, nor as the 2020 dry season began in June. The timelapse below starts towards the end of June, showing only this area west of Reusch Crater. Despite low resolution, the progressive growth of this spot is apparent. While it is tempting to speculate that enhanced, localized geothermal heat may be responsible, an explanation will require an examination of topography (e.g., aspect and slope) as well as the snow distribution pattern.

Lastly, trails are visible on the western slope (top image), between Shira Plateau and Lava Tower, then to Barranco Camp and continuing toward Karanga. Also visible - largely transverse to the trails - are stream channels which in recent years have been deepened and widened by debris flows. Look for a post soon with details on these.