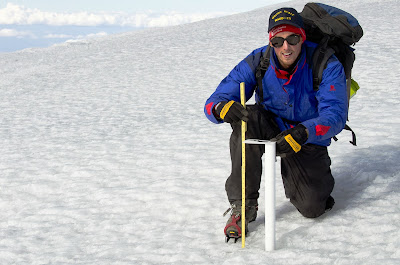 In an early-October entry I mentioned a late-September snowfall event which resulted in ~10 cm of accumulation on the Northern Ice Field, ending 4+ months of ablation. Prior to the September snow, surface albedo had dropped below 0.5 and net radiation receipt was increasing with the seasonal increase in solar irradiance.

Brightening of the glacier surface with the September snow prevented any further mass loss for at least 2 weeks. During this time the snow was transformed by melting and re-freezing to create the bright, icy surface we encountered upon our visit beginning 24 October, as shown in the photo above. Simultaneously, as demonstrated by other evidence, sublimation was removing some of the mass added by September snow.

The next snowfall occurred during our descent (27 October), although we received no rain low on the mountain and were not aware of the snow until the mountain emerged from clouds in the evening.

Today we received a note from Timba at Ahsante Tours & Safaris that more continuous precipitation has begun on the mountain, with fresh snow visible at the summit, and heavy rain occurring during afternoons at lower elevations. Our telemetry data confirm Timba's information, with higher humidity and snowfall especially during the interval 5-9 November. Snowfall was especially heavy on the Northern Ice Field late on 8 November into the next morning, with an average of 14 cm recorded by our 2 sensors. So the glacier-surface albedo has increased yet again, and this event may have been enough to bring thin snowcover to the crater.

As always, we welcome and encourage sharing of any photographs and/or snowcover observations!
Posted by admin at 11:58 AM