On the Northern Ice Field the 2013 "short rains" were right on schedule, with snow accumulation beginning ~5 November and continuing intermittently until ~17 December. Net accumulation of snow at the weather station was 49 cm, which is more than the glaciers typically receive during this seasonal wet period. Settling, transformation and ablation of this snow in the month following (i.e., to mid-January) lowered the surface by ~16 cm. Nonetheless, through the mini dry season before the "long rains" begin in March (typically) the glacier surface will remain relatively bright, causing much less energy absorption than that following years when the "short rains" are meager or fail altogether.

The two sets of Landsat 8 images below depict the regional- and local-scale impacts of the "short rains". In the top set (click to enlarge), Kibo caldera can be located as the small blue area (i.e., ice and snow) just below and to the right of image center; resolution in both cases is 30 m. The first scene (30 October) was acquired shortly after our fieldwork, when virtually no seasonal snow was present at the summit (thin, high clouds partially blur the image slightly). There is little snow within the caldera in the middle scene, although remnants of the snowfall mentioned in an earlier post can be seen. In the 18 January 2014 scene, considerable snowcover can be seen in the caldera and on the flanks of Kibo - even though the short rains ended in mid-December at the summit; perhaps they continued longer at lower elevations. Finally, note the progressive response of vegetation around the mountain to short rains precipitation; an ephemeral lake is visible to the north of Kilimanjaro on 18 January.

The following images are cropped from the full Landsat scenes, providing greater detail of Kibo and the caldera (click to enlarge). 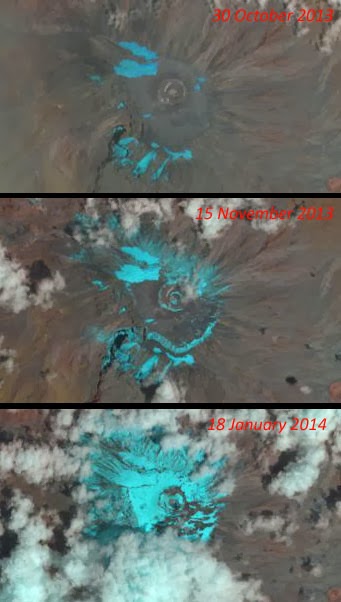