For several years now, I have corresponded with Timba at Ahsante Tours & Safaris about a relationship between Kilimanjaro-region precipitation and cyclones in the south-west Indian Ocean. On Monday afternoon (10 Feb.) he wrote that it was "currently raining big time here, and has been for the past weekend".

So, here is a synopsis of what was happening in the ocean. Tropical Storm Edilson had developed by 5 Feb. Another Tropical Depression formed on the 6th, which became Tropical Storm Forbane on 8 Feb. This quickly developed from Moderate to Severe that day, by which time Edilson was rapidly moving south. Fobane became subtropical by the 10th, and also moved west. Here is a map of the storm's positions on the afternoon of 8 Feb., from the Severe Weather Information Center of the WMO (World Meteorological Organization): 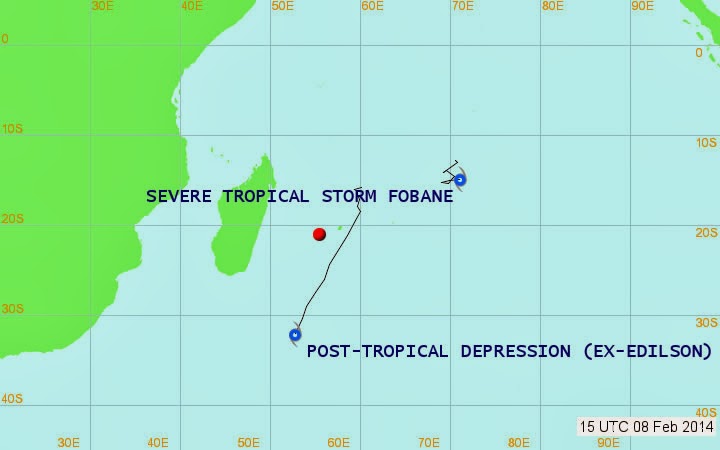 Here is a beautiful map of regional circulation at 500 hPa (summit level) from Earth, based on NOAA data. This is a screenshot showing the situation at 15:00 local time on 8 Feb., with winds from 315° at 21 km/hr (5.9 m/s) at Kilimanjaro level (indicated by the small green circle). Data sent by telemetry from the AWS correspond remarkably well with this NCEP value, averaging 6.3 m/s from 334° for the period noon to 16:00 local time.

A snowfall total of ~20 cm through 9 Feb. is an important event at the arid summit of Kilimanjaro. This time of year is more typically associated with a brief dry interval, while the ITCZ is north of the mountain. It is probably a safe hypothesis that this - and similar snowfall events - are not associated with either the short- or long-rain seasons. Nonetheless, they are tied to regional atmospheric circulation and activity in the south-west Indian Ocean. They are very important in terms of mass balance for the glaciers, and are also to the safety and success of porters, guides, and clients on the mountain. Lastly, with further analysis the impacts of cyclones at this time of year should be relatively easy to forecast. Thanks again, Timba!

[UPDATE 2/12: Simon Mtuy of Summit Expeditions (SENE) wrote that his group was within the caldera ("Crater Camp") on the night of 8 or 9 February. As is sometimes the case, the amount of snowfall appears to have been greater within the crater than on the glacier. He writes "they have huge snow through the night, and the tents were about 1 m under the snow." To reach the summit they had to cross the crater to Stella Point and then follow the ridge to Uhuru Peak, rather than ascend directly from camp. In the text above I mention that unexpected snowfall has consequences for both humans and the glaciers. Simon writes that this event created big problems for the porters, who weren't expecting snowfall and either did not have sunglasses or had some which provided inadequate protection against the highly-reflective new snowcover.]
Posted by admin at 12:27 PM