The most-important wet season for Northern Tanzania - "Masika" or "Long Rains" - typically occurs within the 3-month interval of March through May (MAM). Although a distinct element of regional climate, there is considerable year-to-year variability in both timing and magnitude. On Kilimanjaro, the weather is wet during the Long Rains and few organized groups are on the mountain. The Long Rains are generally coincident with the period of greatest snow accumulation each year.

The plot below shows a proxy measure of recent snowfall at the summit, in the form of daily change in glacier surface height; increases in height are due snowfall or redistribution, and decreases are due to combined processes of ablation. For the 2014 Long Rains, the net change in height based on calendar months MAM is a mere 10 cm. However, based on a preliminary, more-meaningful total of daily snowfall amounts, 2014 is not much below normal -- probably due to several intervals without snowfall (i.e., height decrease) and little new snow after ~8 May (red star in figure).

Most interesting for 2014 snowfall to date is the big February event, specifically the 3 days (8-10) when the net height increase was over 20 cm. The month of February often encompasses a mini dry season, yet not with regional circulation as shown below, when airflow at summit level is out of the Congo Basin! (Flowlines are in yellow; note Lake Victoria at top left, skinny Lake Tanganyika at left, and the island Zanzibar to the right of the date label; winds at the summit AWS are almost always from the East.) For additional discussion of this snowfall event, occurring during considerable cyclonic activity in the south-west Indian Ocean, see the entry for 20 February 2014. Relatively meager precipitation through the entire Long Rains season demonstrates the potential importance of Indian Ocean cyclones to the glaciers of Kilimanjaro. 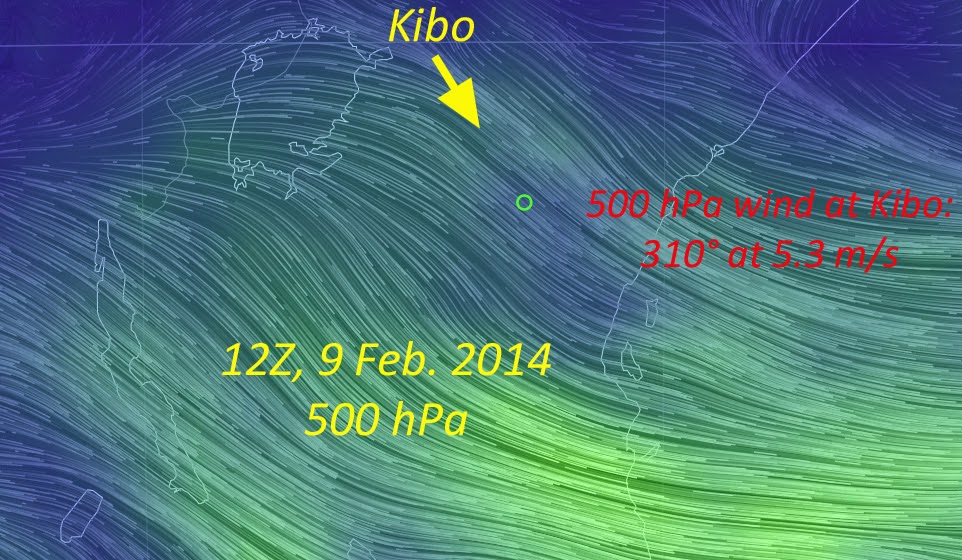