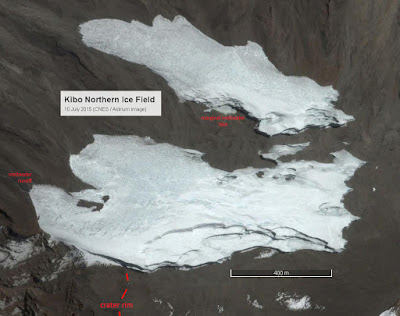 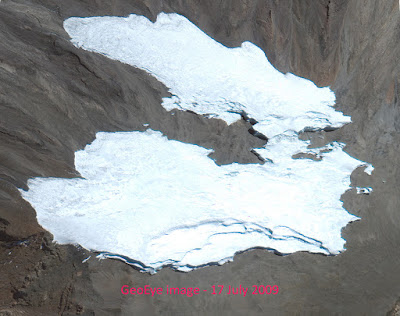 As with all of Kibo's glaciers, the Northern Ice Field (NIF) is shrinking; margins are retreating as the glacier thins. Although the two rates differ considerably, retreat is occurring around the entire perimeter - unlike most glaciers - and the surface mass balance is everywhere negative. As illustrated by the two images above, NIF margin retreat from 2009 (lower) to 2015 (upper) was on the order of tens of meters. Thinning is less apparent in these images, other than the development of holes, and for the same period was roughly an order of magnitude less. Ablation loss as a result of thinning is what we measure continuously at the AWS, and periodically at stakes on the mountain's other glaciers (i.e., specific mass balance).

Since installing our NIF AWS in February 2000, ablation of the horizontal glacier surface has required resetting the tower on 5 occasions. Until October 2011 when we reset the tower most recently, the interval between lowerings has ranged from 12 to 51 months. Yet for 4 years now, the horizontal mass balance has been more positive than negative, never lower in height than 15-20 cm below the Oct. 2011 datum, and currently only 5-10 cm below that level. However, the rate of ablation on Kibo often begins to accelerate during August, and considerable ice loss can occur before new snow accumulates in association with the short rains (typically Nov/Dec).

During July we measured 23 cm of net ablation at the AWS. With another 10 cm, the dirty, low-albedo surface of the NIF will be exposed once again. This dark surface - possibly centuries old - was briefly exposed at the AWS in September 2013 before ablation was checked by a snowfall event which was followed by early arrival of the short rains. In contrast, extended dry seasons in 2000, 2003, and 2008 had the opposite effect, and all required lowering of the AWS shortly thereafter. Albedo is the primary control on ablation here, by governing the receipt of net radiation. (Note in the upper image from last month that snowcover remains only on higher-elevation portions of the NIF, maintaining higher albedo and reducing ablation.)

By the end of this month (August), we will have a better estimate of when the tower will need to be reset. Fortunately, plans are underway for fieldwork during September, when we can carry out the work if necessary.

Our 2015 fieldwork aspirations are ambitious. We will be an international group of 5 scientists, ably guided by the one-and-only Simon Mtuy of Summit Expeditions (SENE), and working for 6 days at the summit. Annual service will be done on the AWS - in addition to possibly resetting the tower - and a number of sensors will be swapped out for calibration. We will also conduct the first thorough survey of NIF ice thickness and stratigraphy, by a series of radar transects. A small number of ice cores will be drilled and transported in frozen state back to labs for additional radiocarbon dating, as well as micrometer-resolution analysis of impurities. And as always, we will continue documenting both retreat and thinning of all the mountain's glaciers.