The value of a photograph

Measurements from our Northern Icefield AWS are transmitted to us in near-real time via the Argos system, which has proven to be extremely reliable. Telemetry is especially valuable for stations such as Kilimanjaro, for safely conducting fieldwork at 5,700 m requires considerable time simply for acclimatizing. With access to data by telemetry, conditions on the glacier can be monitored remotely, which saves on logistical costs and aids in fieldwork planning.

The figure above illustrates one measurement provided by telemetry: changes in glacier surface height. Decreases in height are due to ablation, the combined impact of melting and sublimation. Height increases are due to snow accumulation. Over time, the plot reveals both seasonal fluctuations of Northern Icefield surface height, and the on-going thinning which has been underway for decades.

For the time interval since June 2015, the bimodal wet seasons are depicted in green (Vuli = 'short rains', typically November & December) and in blue (Masika = 'long rains', typically March-May). Red circles represent the times of fieldwork in September 2015 and August 2016, and a recent visit described below. On the figure, note the lack of accumulation during the 2016 short rains, discussed in prior blog entries. Without much snowfall to add mass and brighten the glacier surface, ablation resumed in January 2017 at a rate similar to the dry season; this is not normal! 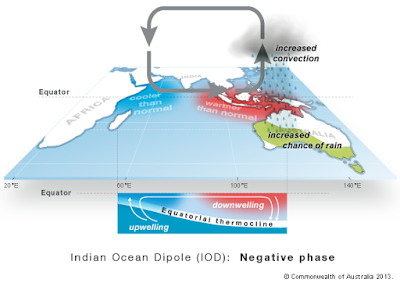 The lack of 2016 short rain precipitation on Kilimanjaro was at least partially due to a temperature contrast between the eastern and western Indian Ocean - the Indian Ocean Dipole - depicted above. During the NH summer, high ocean temperatures in the east led to more evaporation and cooling of the moister atmosphere. Easterly airflow over the western Indian Ocean resulted in less convection and less moisture delivery over East Africa during the short rains. In addition to less snowfall on the glaciers, the IOD is contributing to drought and famine in East Africa to the north of Tanzania. With over 10 million people facing food insecurity or worse, the consequences are profound (e.g., see here). 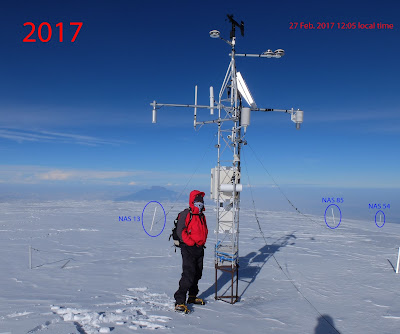 Back on the Northern Icefield, an on-site image from the AWS has provided information which measurements cannot. The image above was sent by Thomas Lämmle, who is frequently on Kilimanjaro with his company "EXTREK-africa" (website and Facebook EXTREK.AFRICA). Thomas' photo confirms the extent of ablation over the past couple months following the failed short rains. With great relief, the AWS tower appears to have remained nearly plumb, despite slackening of the guy cables. Also visible in the image are 3 ablation stakes (within blue ellipses) whose heights have been measured upon every prior visit.

Compare Thomas Lämmle's image from last month with a similar perspective ~17 months earlier, in September 2015 (below). From measurements at the AWS and the ablation stakes, we know that there was little net change in surface height between Sep. 2015 and Aug. 2016. The top figure also reveals that there was indeed no net lowering between Oct. 2011 and July 2016 (see y-axis). Not coincidentally, the AWS tower last required resetting in 2011 - the previous IOD negative event which was also associated with severe famine in East Africa, claiming 260,000 lives (link here).

Combining AWS data with photogrammetric ablation stake measurements reveals a glacier surface lowering of 40-45 cm between Sep. 2015 and the end of last month. Thanks to this recent photograph, we know that the AWS remained vertical as March began. Hopefully the long rains will bring new accumulation, which is the critical control on surface ablation at the Northern Icefield. 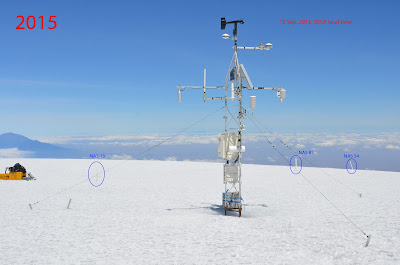