To provide a context on limited snowfall during the short rains (Nov/Dec), a previous post solicited recent images from the summit. Thanks for the submissions!

Images #1 and #3 here were taken on 2 February and sent in by Pik-Ki Fung. The above view is looking north from Uhuru Peak (summit) across the Furtwängler Glacier and the crater to the Northern Icefield. Despite a moderate snowfall event of ~5 cm on 30 and 31 January, most of that new snow had sublimated and melted prior to when Pik-Ki reached the summit. Rapid ablation of thin snowcover within the crater is typical, as solar radiation is transmitted through to the dark ash. Note that fresh snow remains on glacier surfaces.

The Furtwängler Glacier remnant circled in red above is also visible in the image below, sent in by Kshaunish Jaini of AlienAdv.com. (Kshaunish provides considerable interesting information about climbing Kilimanjaro on this webpage.) The image below from near "Crater Camp" appears to have been taken in the morning, on either 21 or 22 February, and reveals a thin snowcover within the crater. Telemetry from the NIF weather station shows no snowfall between the final days of January and the days just prior to when the image below was taken. Although a minor event, several centimeters of snow accumulated between the 18th and 20th, which is likely what is visible in this image. Even a thin snowcover reflects most of the incoming solar radiation. Thanks Kshaunish! 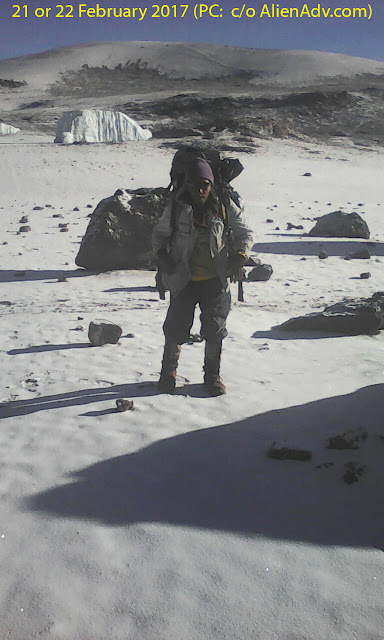 The image below is looking south, the opposite direction as image #1, and was taken the same day (2 February). Fresh snow is only visible in isolated patches on the ash, yet remains on the glacier and meltwater lake in the foreground. This is the upper Kersten Glacier, seen here a year earlier.

Hopefully the long rains (March-May) will bring fresh snowfall to Kilimanjaro, brightening glacier surfaces and thus reducing radiation receipt. Indeed, both human and natural systems in East Africa are in need of rain, after failure of the 2016 short rains.
Posted by admin at 5:04 PM